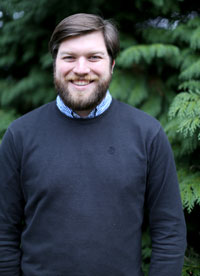 Originally from Canada, Ned Richardson-Little completed his doctoral work at the University of North Carolina at Chapel Hill and was an Associate Research Fellow with the 1989 after 1989 research group from 2014-2018. His research with the project examined the history the globalization of human rights and international law in East Germany and the Eastern Bloc.

While 1989 and the collapse of state socialism is held up as the end point of the international human rights movement and the culmination of decades of activism and diplomacy his research complicates the triumphalist narratives of good inevitably overcoming evil, ushering in a unified global human rights culture, by examining the complexity and plurality of human rights in late socialism. His first monograph, “The Human Rights Dictatorship: Sovereignty, Dissent, and Revolution in East Germany 1945-1990,” will be appearing soon with Cambridge University Press.

With the support of a Freigeist Fellowship from the Volkswagen Stiftung, Ned is now leading the research project “The Other Global Germany: Transnational Criminality and Deviant Globalization in Germany” at the University of Erfurt. You can read more about the project here: https://www.uni-erfurt.de/en/geschichte/globalgeschichte/personen/dr-ned-richardson-little/